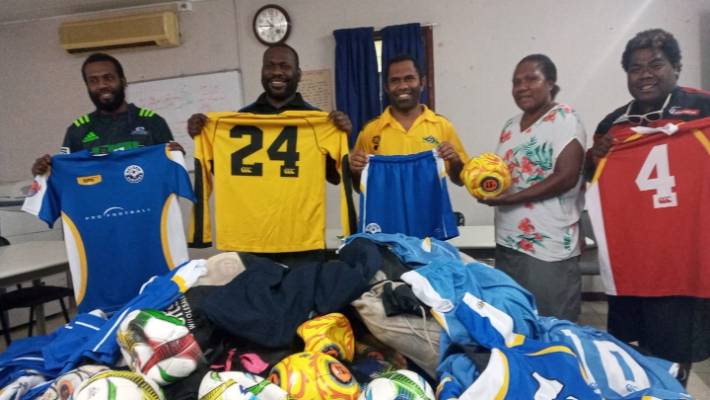 Vanuatu’s up-and-coming football stars will be well-equipped to kick on with their sporting goals, thanks to a generous donation from Nelson and their fellow Ni-Vans based here.

The delivery was co-ordinated by a group of Recognised Seasonal Employer (RSE) workers from the island of Epi returning from a stint working for Birdhurst and Golden Bay Fruit Limited in Tasman district.

Shefa is one of the six provinces of Vanuatu, located in the centre of the country and included the islands of Epi, Efate and the Shepherd Islands.

Kalo Noel Benjamin is a sport development officer at the Shefa Education Office as well as the head coach of Erakor Football Club in Port Vila, where among the players he had mentored was the Auckland City defender and former Tasman United player Brian Kaltack.
Benjamin said the gesture had come as a surprise to the education office but had been graciously received and would be distributed around  schools within the province, who often lacked adequate sports equipment.
He said football was a favourite sport amongst schoolchildren in Shefa and this year the education office was introducing a mini-championship for U15 players – named Kick NCDs – to encourage “soccer for life”.
The Nelson support would motivate pupils to get active in these kinds of sporting programmes, promoting health in schools while reducing the likelihood of youth becoming involved in social problems, he said.
“We have remote schools that hardly have some chance to kick a soccer ball, however, we believe that [this] help … will touch the hearts of kids who love soccer and Vanuatu is one of the craziest nations who love soccer.”
Speaking to Vanuatu’s  Daily Post newspaper on their return home, RSE team leader Anika Maite acknowledged Nelson Suburbs ongoing relationship with RSE workers in helping to give back to their communities.

RSE workers employed by Birdhurst Company have previously funded the construction of a fully furnished doctor’s house at Vaemali Hospital on Epi which was opened last year.