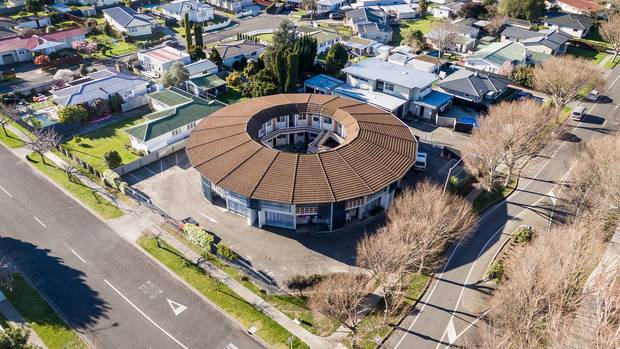 An odd-looking Hastings complex that houses seasonal workers for the country’s biggest organic orchard is on the market for sale with a 20 year lease.

Once a motel, the complex at 902 Sylvan Rd, Mayfair has 80 beds and facilities for mainly short-term visa workers from the Pacific Islands who qualify under the Recognised Seasonal Employer scheme.

The 1000sq m, well-recognised, almost round building on a 1616sq m site is being marketed for sale by private treaty closing on October 23 through Bayleys Hawke’s Bay salespeople Rollo Vavasour and Jake Smith.

Owned by Bostock Group, the largest organic apple producer in the Southern Hemisphere, it has a substantial lease length and annual rent of $200,000, Vavasour said.

“It is unusual to have a 20 year lease in any building but Bostock has to rely on seasonal workers from overseas for picking its organic apples and exporting conventional apples on behalf of independent orchardists.”

Bostock signed the 20-year lease in July and has two five-year rights of renewal with final expiry in 2049. The group pays all the outgoings on the property.

Zoned general residential under the Hastings District Plan, the unusual building was designed to the highest standard for 19 motel units, each having a separate kitchen, toilet and shower with a balcony or patio along with a ground floor laundry.

The units have been converted and retrofitted to provide 70 beds. The rest of the property is a fully fenced concrete and hot mix yard.

Bostock employs 800 people at the season’s peak and has along with two other of the country’s biggest orchardists formed Fruitcraft, which has recently been granted the master licensing rights from Prevar, for production and marketing the Dazzle apple, which has taken 20 years to develop by Plant and Food Research at its Havelock North station.

Fruitcraft is predicting one million cartons of Dazzle will be exported by 2028, making it one of the country’s most popular apple varieties.